The Background
I'm a child of the 90s, so for this week's design challenge hosted by Spoonflower.com, I decided to go retro and create a 90s/00s-inspired design. One thing I wanted to do with my design for this week was incorporate the calendar aspect somehow into the design, without it just looking like an afterthought. The best typography is when it goes unnoticed and meshes with the overall design.
I was inspired by all the different digital screens and boxy nature of a lot of the tech in the 90s, which was perfect for displaying the calendar for each month in a different, fun way. My first ever computer I played with was a Commodore 64. My father was a tech wiz in the 90s/00s, so I grew up on the computer earlier than most kids and was surrounded by my fair share of floppy disks, tape drives, write rings from magnetic tape drives, and DOS. I still have my old Compaq desktop computer from the late 90s stuffed in a closet somewhere.
I love that the 90s aesthetic is cool again, and wanted to try my hand at the Y2K revival. It takes me back to my first concert in 1999 when I went to see *NSYNC with B*Witched opening, digging through my cassettes, and playing The Legend of Zelda: Link's Awakening on my Gameboy Advanced. 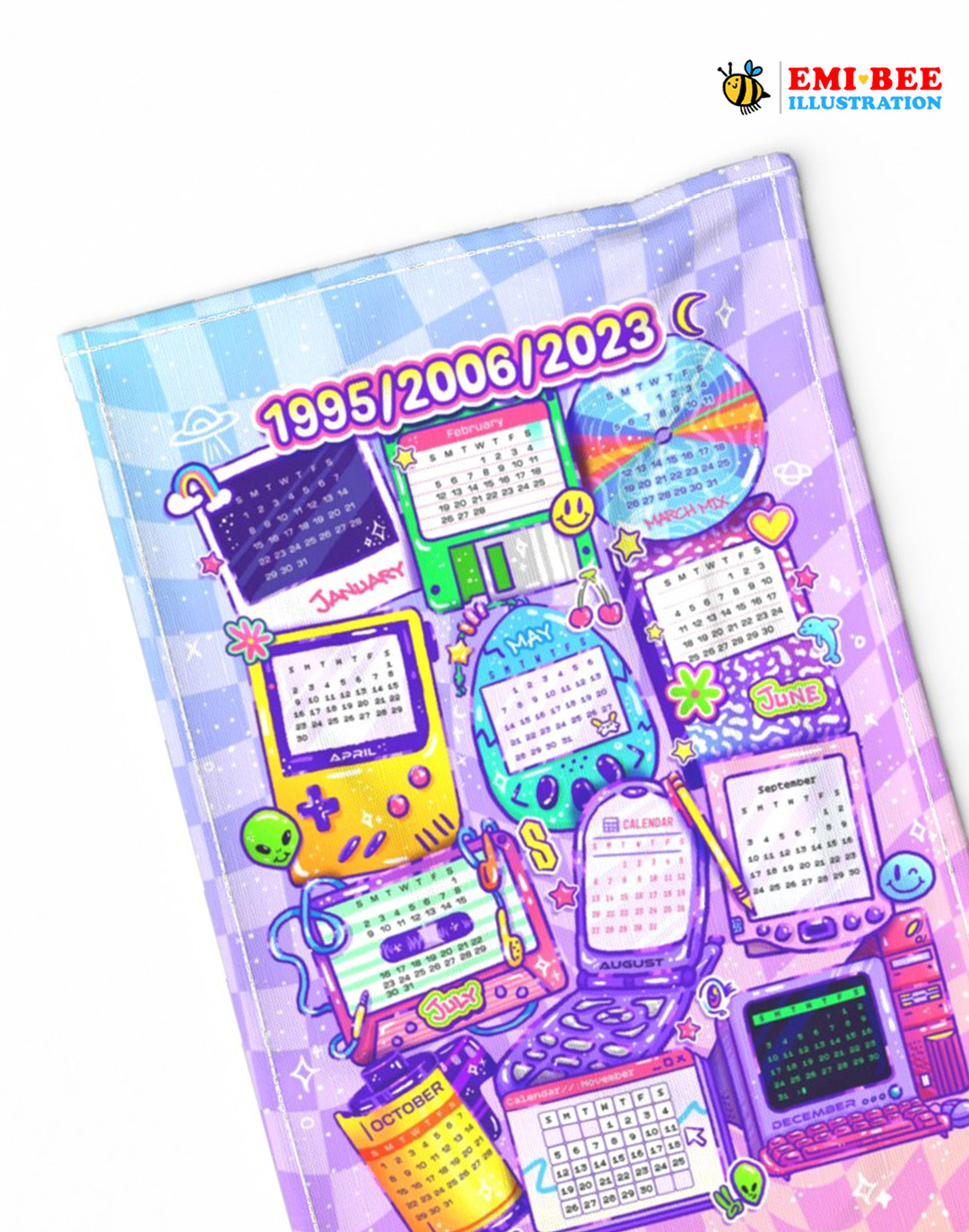 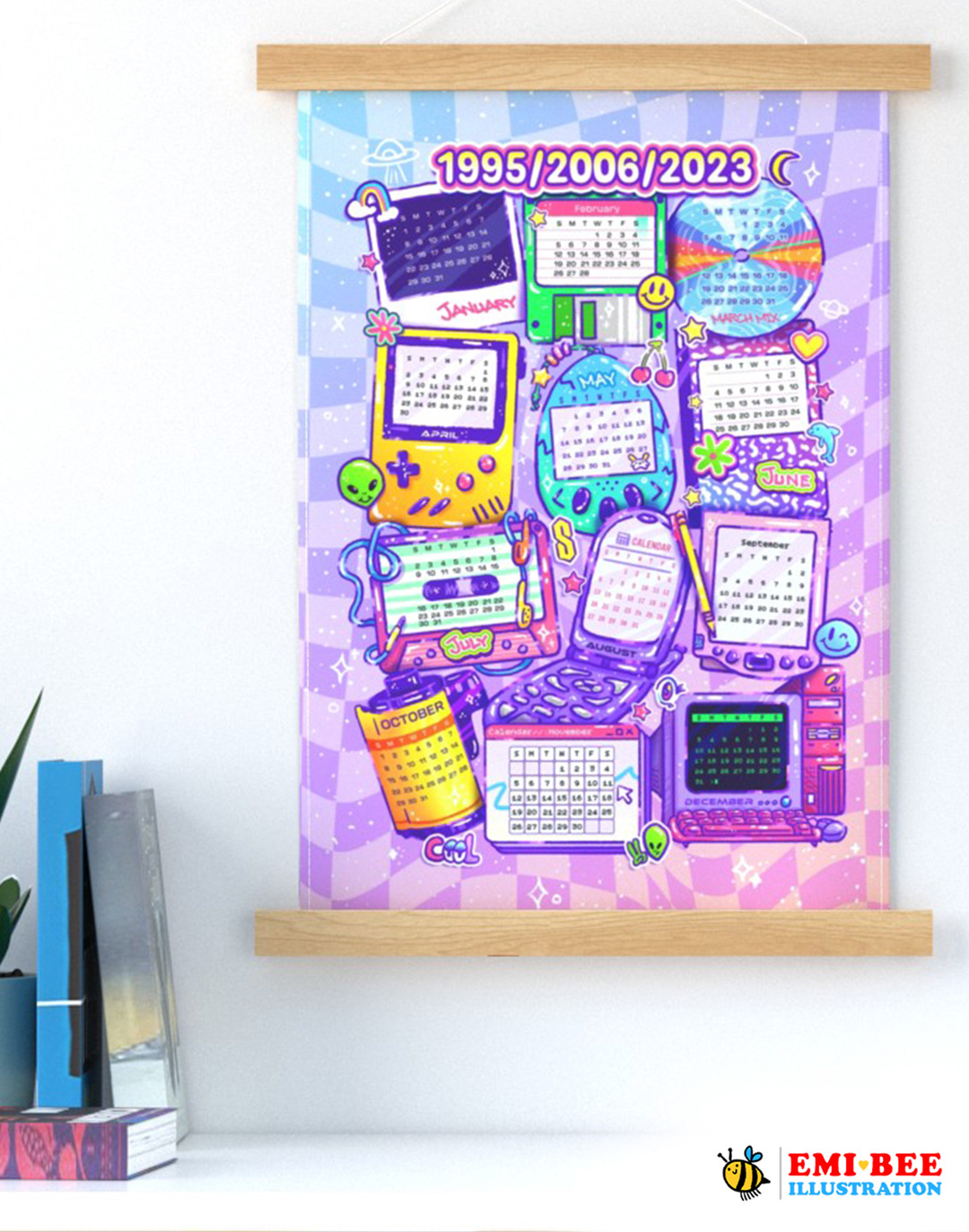 The Process
For this challenge, since I wanted to incorporate the typography into the design, I picked 12 different iconic items that represented the 90s/00s and had enough space or a screen where I could display the days and weeks of the calendar. I thought it would be fun to use the month names as brand names and stickers on a few of the items, such as the handheld gaming device, the computer monitor, and the composition notebook. I used a variety of fonts and type styles. Usually in good design, you stick to maybe three fonts tops, but the 90s were pretty maximalist, so I mixed it up a bit. All of the fonts I got off Adobe Fonts and mostly used the Metaverse Mix collection curated by Adobe Stock. The 90s was big on the wide fonts. I also used fonts from the Subway family for the hand-written text, and Caraque for the years displayed at the top.
I thought it would be fun to add the years in the 90s and 00s that the calendar could be reused from along with the current year. I have a huge molded 1993 Hello Kitty calendar that I want to get out and reuse, but I'll have to wait until 2027. I know a lot of people like reusing vintage tea towel calendars and wanted to sort of incorporate that into the design. 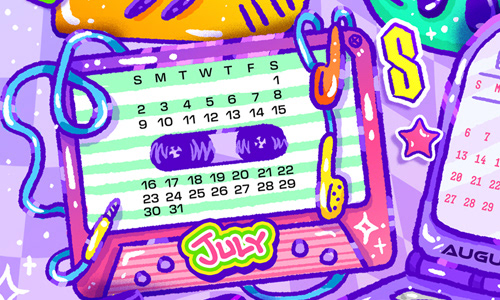 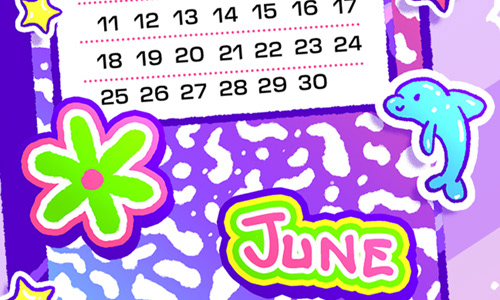 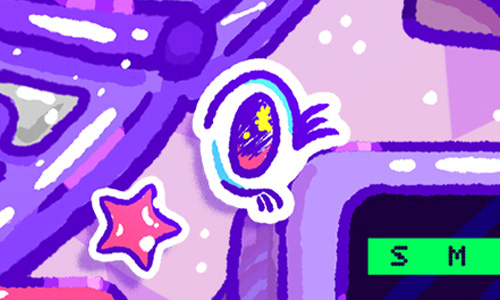 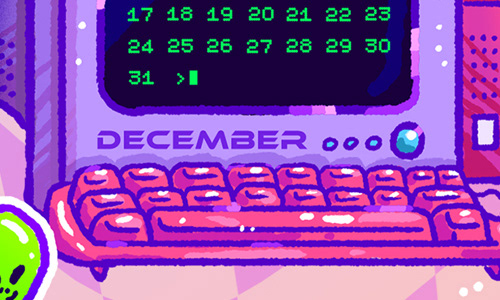 I also wanted to do a little nod to what was popular in the 90s with the little stickers. I included an anime eye, a moon, a dolphin, a couple of aliens, the infamous Super S, some flowers and stars, and cherries. It seems like I saw all of those pretty much every day in the 90s. I still have a bunch of old stickers I wanted to keep instead of using them up. I really wish I had bought more stickers in the 90s. That was the best time for stationery.
I was debating whether or not to make this more anime, since I loved watching magical girl shows and grew up with Ghibli before everyone else seemed to find out about it, but decided to just stick with pop culture and keep a 90s anime design on the back burner for the future. (Although I couldn't resist sneaking that anime eye in there. I pretty much exclusively drew anime eyes as a kid.)
What do you think of the final result? Connect with me on Twitter and Instagram, both @emibeebuzz.
Voting runs from 9/29-10/4. Be sure to look for my 2023 Y2K Calendar in the midst of all the other lovely entries!
Vote Here

Why You Should Write Creative Briefs for Yourself
↑Back to Top